Major US steel company Steel Dynamics Incorporated (SDI) recently implemented an upgrade program at one of its Indiana mills. An overhead bridge crane, which had been in operation for more than 20 years, had to be removed to allow a new model to be installed.

Smith Erectors Incorporated was brought in to project manage the heavy lift of the 300 ton crane and decided from the beginning that a steel wire rope lift would not be viable due to safety procedures, ease of handling by personnel and weight restrictions.

Smith chose Cortland for its high performance synthetic ropes and was supported with product expertise before and during the lift.

The Challenge
SDI’s bridge crane at the facility, which produces three million tons of rolled steel every year, had to be safely removed from the mill in two large sections using a crawler crane. Smith required basketed rigging to be constructed around the bridge, and some contact surfaces were considered extremely sharp. As the lift was to be performed 85 feet in the air, this was a key hazard for the load bearing ropes.

Smith’s project managers Justin Smith and Clint O’Day decided from the outset that they would not use wire rope for the lift, so developed an alternative plan involving Cortland rope and also VanBeest shackles, both recommended and supplied by ASC Industries (Alloy Sling & Chain company), Illinois. The ropes used would have to be strong enough to lift the structure, be highly durable and protected, and align with the use of the chosen shackles.

The Solution
Cortland’s proven Plasma® slings were selected to eliminate 18,000 lbs of the rigging weight from the assembly, thereby reducing the overall capacity to be handled by the crane. To counter the abrasive surfaces, the team used High Modulus Polyethylene (HMPE) chafe guard jackets over the rope for additional protection.

The rope itself was Plasma 12×12, which is also produced from HMPE, but is enhanced through Cortland’s patented manufacturing process. The finished product is known to be durable and cut-resistant, with bending flex fatigue that is superior to wire. It also conforms to the shape of the structure being lifted, making it ideal for creating a basket around the bridge on this project.

Ahead of the lift, Smith established an accurate D:d ratio, which refers to the ratio between a sling’s diameter (d) and the diameter of the object it interfaces (D). It was essential to understand where the connection points would be and adjust the calculations accordingly, helping to know which size of rope to use. Achieving this figure allowed the team to know the breaking strength of the sling when bending around the bridge.

The assembly was comprised of eight 3 inch x 25 feet grommet slings, which were attached from the crane hook to the shackle. A series of eye-to-eye slings of 20 feet and 14 feet lengths were also used. This was a particular requirement on the second lift as the eye-to-eye slings were used in a basket configuration around a rolling block, which would not have accommodated a standard rope set-up.

The Result
The synthetic rope sling solution reduced rigging time from an estimated 20 hours to just 5 hours during this 1 day project, which was 6–8 months in planning. Crucially, using synthetics meant the materials were safer and easier to handle for the on-site personnel. This reduced the manpower required per lift and allowed the team to work more efficiently.

During the lift itself, the lightweight, low-stretch and high-strength properties of the Plasma 12×12 became an advantage as the bridge sections were lifted up and out of the SDI mill. The product is known as the highest strength synthetic rope available on the market and the assembly on this project had a total capacity of 300 tons.

Following the lift, Smith Erectors’ owner Garland Smith said: “Ahead of the project, we gained an understanding of what Cortland would bring to the project to complement our own expertise. On site, the lift went to plan, and it was impressive to see the two rope slings in action in combination with our chosen hardware. Ultimately, they made it possible for both lifts to be carried out in one day.” 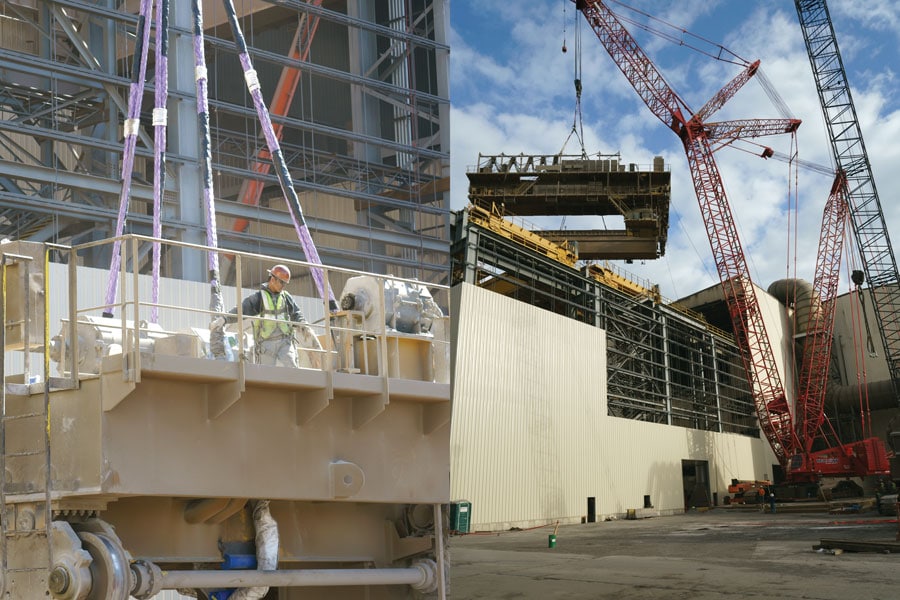