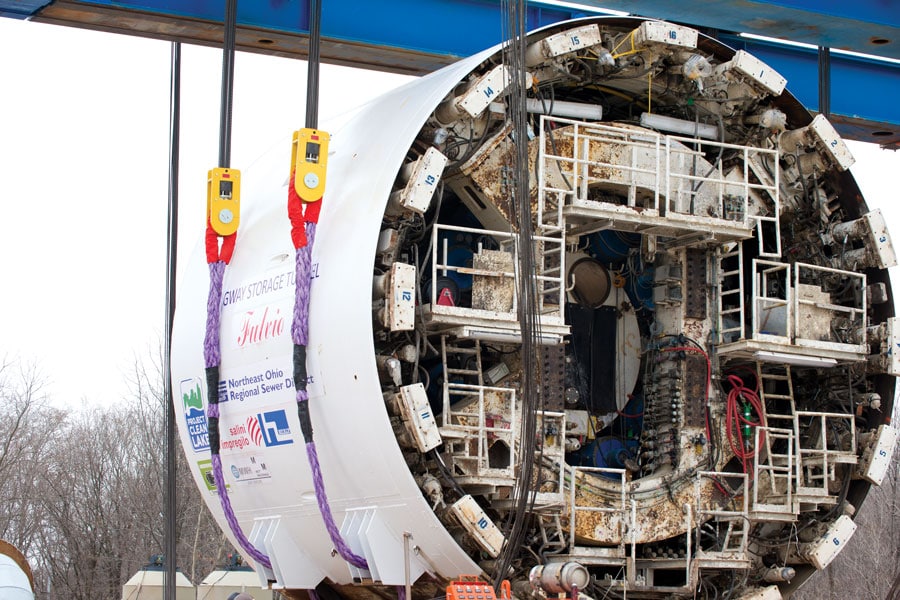 To bring the state of Ohio into line with US Environmental Protection Agency regulations, a major $3 billion municipal infrastructure program named Project Clean Lake was instigated.

As part of planned improvements across a 25-year timescale, 21 miles of concrete tunnels are currently under construction below the city of Cleveland. These tunnels are part of a sewage system which will reduce the level of polluted storm water and raw sewage entering Lake Erie and its adjoining waterways by 98%.

A group of agencies and companies collaborated to complete the critical lifting and lowering of the giant, 27-ft diameter boring machine into place. Cortland was selected to engineer and provide heavy lift slings, based on their track record on critical offshore lifts.

The Challenge
Weighing 495 tonnes, the boring machine had to be lifted from a Self-Propelled Modular Transporter unit to a gantry lift before being lowered underground. In collaboration with a crane and rigging specialist, Cortland’s slings would have to lift, lower and set the equipment within a tight timeframe of 20 hours.

The lifting and lowering phase took place in sustained below freezing temperatures, making an effective plan critical for safety and technical capability.

The Solution
A typical solution for such a project would be to use one of two options—wire rope slings or large round slings.

Cortland worked with the customer and partners to devise an alternative solution using the Plasma® 12×12 rope sling solution. It is 1/7th the weight of a wire rope and about half the size of a standard round sling and boasts exceptional durability. It only requires about half the hardware width of most high-performance round slings made using ultra-high-molecular-weight polyethylene (HMPE).

Four-inch diameter Plasma 12×12 rope slings were spliced to specifications at 63 feet in length and were fitted around the boring machine then hoisted by a heavy track hydraulic skidding system with jacking load shoes into the Dugway Storage Tunnel.

The materials used to lift the boring unit were low-stretch which achieved a load limit of 1%, equivalent to steel.

The Results
The use of the Plasma products demonstrated the evolution from the use of steel and polyester to modern high performance synthetic sling alternatives. Cortland has recently delivered similar solutions in marine, mining, and oil and gas using its range of synthetic fiber solutions.

The teams on-site could handle the Plasma slings with greater ease than steel or bulky round sling alternatives.

The project management team worked with various agencies to complete the work in only 10 hours.

Richard Miller, lifting specialist on this project, said: “We have been aware of Plasma rope slings as a lifting and lowering solution since they were used in a testing environment several years ago. It was obvious that they were easier to handle and rig than wire alternatives. Recent use has shown that they far outlast synthetic slings on the market and we were satisfied with the positive outcome on this complex application.” 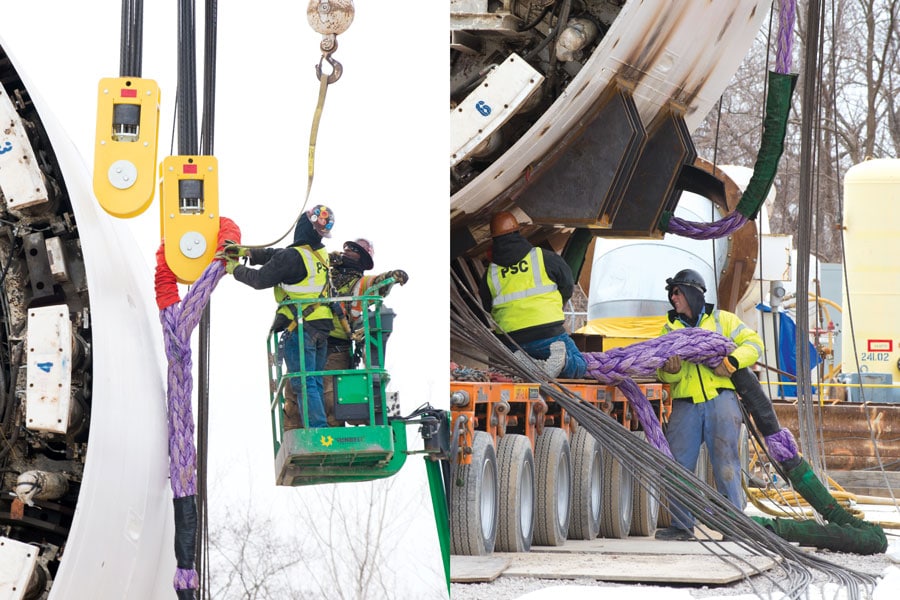